What about the stone?

The role of the stone is to take the metal away from the blade bit by bit.  The stones that are about to be discussed do this well, but some people are obsessed in the small details regarding which stone is better than the other.  The differences are so minor that the time studying the stones could be spent better studying the different techniques of sharpening.  As for the stones, get the biggest stone that you could fit in your workplace, because bigger stones make the job of blade sharpening easier. 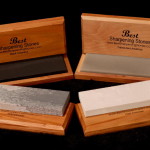 Arkanses Stones – these stones have always been known as one of the best stones to be used for sharpening.  Soft Arkanses stones have been known to provide the coarser grits, while the harder ones fit well for the harder grits.

Early on people believed that oil should be used along with these stones.  Juranitch, however, has been saying that oil would just hinder the stone from doing its job.  Those who have used these stones without oil have reported very positive results.  However, if you had used your Arkansas stone with oil before, then you would have to continue doing so until you get a new stone. 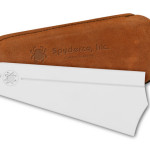 Synthetic stones – these are really hard stones that do not wear out like their natural counterparts. 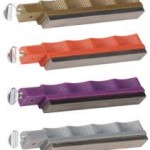 Regular stones are known to eventually develop valleys in them, as not only the steel of the knives gets worn, but the stones that sharpen them as well.  They respond to detergent-charged steel wool very well, and I personally use SOS detergent pads.  Some might say that these tools would clog up the stone, but this is not the case at all.  If you want to see some synthetic stone samples, you could get them from Spyderco and Lansky. 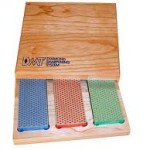 Diamond dust stones – these stones cut very quickly into the steel, and if one is not careful the blade might just diminish much faster than expected.  Some do say that there are stones that have their diamond dust wear off, leaving just a dull stone in its place.  I’ve tried the DMT stones and have confirmed that these do not have that problem.

Japanese water stones – these stones are made to stay in a water bath, and some sort of foam forms on top of these stones during the sharpening process.  The foam helps the blade in the final polish.  These are very expensive stones, and their grits can go to a very high number.

All these natural stones eventually develop a curve in the center, and this could make the process of sharpening rather difficult.  In order to flatten out your stone once again, you could use either wet or dry sandpaper.  Mount it on a table and rub your stone on top of it.  This is said to work very well.

Should water or oil be used on the stone?

Oil has been used on sharpening stones for decades, and it is done for a number of reasons.  On an Arkansas stone, oil is supposedly used to allow the metal particles to float from the stone and wash away.  This would prevent “clogging” from happening to the stone.

John Juranitch has gone against this idea and has proposed that any type of liquid will just minimize the removal of metal from the blade, making the sharpening process much slower.  He also says that the metal particles that are found in the oil will simply wash through the sharpened blade and make it dull again.

If you have been using either water or oil on your stone and would want to try out sharpening a blade without any type of liquid, you will need a new stone.  This is especially true for the Arkansas stone, as the sudden attempt of dry sharpening on a stone that has previously had oil on it would definitely clog the stone and make all efforts in sharpening useless. If you have a new stone, go ahead and try sharpening without the use of any liquid.

Japanese water stones are the only stones that need water, as it is designed to break down during the sharpening process and create a certain type of foam, which would help in the polishing of the knife.  Diamond and synthetic stones work fine without water.

The use of liquid during the sharpening process is, at this point, a personal preference.  If you wish to work a bit longer, then go ahead and pour liquid on your stone.  What really is important is that you develop the skill to hold the knife or edge at the right angle during the sharpening process.  If you are unable to do this, then the whole exercise could turn out to be useless.

How Fine a Stone Should I Use (plus a Segway regarding grits)?

Of course it is always recommended that one start off with a one of the coarser stones and then finish off with the finer ones in order to come up with a fine edge.  The coarse stones bite off more metal from the blade, leaving indentations in the edge that some call as micro-serrations (more on this is the plane vs serrated edge FAQ).  Juranitch did look at a blade under a microscope though and said that there is no such thing, but its existence, and usefulness, is still debatable.

The fact remains that there is a difference in the knife when one ends the sharpening process with a coarse stone as opposed to when the finer stones are used.  If you use a fine stone, you will notice that the knife will work very well with precision cutting tasks such as carving wood and skinning an animal.  The cuts will be very clean and precise.

Knives polished with rougher stones have edges that tend to bite into and grip whatever is being cut, making the cutting process quicker.  These knives work well for hacking grass and cutting rope.

If you start off your sharpening with a coarse stone, let’s say a grit of 300 or 400 (some would classify this as a medium already), then you could end up with a sharp knife that could cut well through rope and other items.  The micro-serrations would be rather huge in this case, and although some would like to end it there, personally I would still go for a finer grit after just because this edge seems to be a bit course for my taste.  Just to start off a comparison, one could use this knife in order to shave and get away with a few scratches.

Now if one follows up with a 600 grit stone, then this would put finer micro-serrations on the knife and still allow its use for everyday tasks.  It would also achieve a close shave for whoever uses it.

On a partially serrated blade, one can use a 1200 grit stone and come up with a very good utility knife.  The serrated portion of the blade would take care of the course items that one would need to cut, and the finer part of the blade can do the finer cutting and stay sharp for quite some time.  No need to talk about shaving with this type of grit.

As previously mentioned, there are Japanese wet stones that go up to 8000 grit, and some might say this is a bit over the top.  If you do decide to shave with this, all you need to do is bring the blade close to your body and you’ll be able to see the hairs just jump off your skin.  The real question here is “what calls for this fine a blade in one’s everyday tasks?”

One thing noticeable about blade sharpening books and articles is that they all praise the sharpest blade.  Most would advise a test such as shaving an arm or cutting a thin piece of paper, and this is all good.  Before exerting all the effort to achieve this type of edge though, it might be good to take a step back and consider what the blade will be used for.  Blades sharpened with coarse grits may not feel as sharp as those polished with an 8000 grit stone, but they would definitely do better when used to slice rope.

A person named Mike Swaim had done some tests to compare the performance of finely sharpened blades against those that had their edges dragged across coarse stone.  The results indicated that those with the coarse stone-sharpened blades were able to outperform their well fine sharpened counterparts in certain tasks.  Furthermore, after each test, Mike would put the finely sharpened knives to a file and do the test again, and that made the performance much better.

What do these tests indicate?  It says that the grit that you use should be commensurate to the type of job that you want to do with your knife.  A cutter that was sharpened with a 300 grit stone may not be as sharp, but it just might outperform another knife that was put to a 1200 grit stone.

Sometimes you hear that a blade is considered to be too sharp.  This really just means it is too finely polished and you might need to make the cutting edge a bit rough so that it would be more effective for the task at hand. 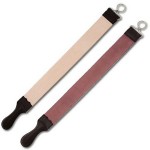 You might have seen a barber take out a leather strip and run his blade along the hide right before giving you a shave.  This is stropping.  The leather is often charged with an abrasive such as green chromium oxide or stropping paste, and then the blade is run across the body just to take out the burr and give the blade a polish.  It is a step that some do not use, but it is easy to do and it gives the knife a good, sharp edge.

When stropping, be sure to wash your knife first, and then dry it fully and carefully.  If the knife is put to the leather without washing, the leftover metal bits might dig in to the leather strap, and that could be detrimental to the knife’s edge.  To charge it, do not apply the liquid to the knife or leather directly.  Put the gel on your fingers and rub it into the leather.

When stropping, do not do it with the sharp portion of the blade going against the strop.  The spine of the blade should go first, and the edge would be trailing behind.  Do not rub the blade into the leather.  Instead, just let it pass over the leather with a little bit of pressure for that polishing effect.  When you have stretched your arm out fully, just raise the blade, flip it over and then pull the knife back to you with the blade trailing behind once again.

The strop is a very useful tool that could make knives extremely sharp, and it could cover up certain flaws in the sharpening technique of the user.  However, this must not be the final step that you do all the time.  One should be able to achieve that really sharp blade without even using the strop.  Strop when you need a sharp edge, but continue to study your technique to see how you can sharpen knives perfectly.

Now some people, when caught in the field without a leather strap, use their jeans or their palms as a strop.  Although admittedly even I have done this in practice, I have to say that this is an extremely dangerous move and that one should avoid doing this.  That being said, note that whenever I did it, it was extremely effective.

If you need an immediate alternative to leather, cardboard is known to work well.  You can charge it with some metal polish and then strop as described above.  People have claimed to get good results when stropping with cardboard even without the use of metal polish.  Some have even made it a standard step when removing burr from chisel-type knives.